The Firefly was a great amp for what it did, which for me was to get that Marshall tone - either the classic rock Marshall sound or the higher gain Randy Rhoads tone. However, as the years went by I found myself not really using it that much. Probably mostly because it didn't have a very useful clean tone - I tended to want an amp with good clean tone and light/medium overdrive and was tending to rely on pedals for the higher gain sounds. So I finally decided to gut the Firefly and start over - this chassis eventually became the Stratifier.

My first tube guitar amp was built from a design called the "Firefly" by Doug Hammond. It is a very low wattage amp that is designed to have a Marshall-like voice to it. This thing really rocks and is a lot of fun.

I started by building Doug's Rev 1, though I left a space for a third tube and more controls so I could update it later to his Rev 3. The "resonance" tone control is subtle but I like having it there. I found that the 0.002 uF cap across the output tranformer (OT) reduced the highs too much for my taste so I removed it.

A few weeks after completing the first version I added the 3rd tube cascode boost option from Doug's Rev 3 schematic, however I left the resonance control in. This allows me to reduce bass slightly for the unboosted sound but increase bass when the cascode boost is engaged, since the sound is more mid-range and upper harmonic focused then. After playing with it for a week I realized that there was too much buzz at the higher gain settings and decided to add the 0.002 uF cap on the OT but make it switchable. This allows quite a bit of flexibility with the sound that you’ll hear on the sound clips.

There are a few issues that I encountered. In retrospect I should have planned the whole build better - but that’s part of learning. Although I had left an open socket for the cascode tube, I hadn’t left front panel space in front of it. So the first and second stage wiring to the controls crosses, and even though it is shielded there may be some interaction because I get some funny results at really high gains. The real no-no in my first build is that the switch for the 0.002 uF OT buzz cap is mounted on the front panel next to the switch for the cascode boost. So that places the input and output for the whole amp right next to each other. This led to oscillations when I first tried the cascode. To fix it (temporarily until the whole thing is rewired) I mounted an aluminum shield around the cascode switch and wiring. Now it is stable to pretty high gains as you’ll hear, but you still can’t get both gain controls simulaneously to 8 or 10. The only other issue is a little more 60 Hz hum at super high gain than I’d like, but again, I’ll track that down some day when I rebuild it. The amp is extremely useable the way it is now and a lot of fun.

The Firefly sound samples were recorded in my bedroom studio. The amp was mic’d with a Shure SM57 about 6 inches from the grill, preamped with a Mackie 1202 mixer and recorded to PC hard disk with Cakewalk Sonar. No EQ is added to any of the recordings, just a little short delay (< 30 msec) to give it some artificial room ambience so it doesn’t sound so dry. Very short delays (<1 msec) are also used for "panning" since they give a more stable stereo image than conventional pan pots.

The guitar on all clips is an Epiphone Les Paul with the bridge humbucker volume at 10.

The bass is a custom Brubaker bass on loan from my buddy Leo, recorded through an Alesis nanocompressor and the Mackie board with a little low EQ. The drums are the Alesis D4 recorded from the electronic pad set first to MIDI (with a lot of quantization since I’m not a real drummer) and then transferred over to audio.

This clip is a riff by one of my favorite 1970 era bands (Humble Pie) and in my opinion has a great Les Paul through Marshall tone with moderate gain. It's the reason I like the amp really well even without the boost engaged.

This clip shows a fairly low gain setting for the amp where chords are still really clear although the amp is still overdriving a bit. The riff is from a tune we do with the Praise Band.

This clip shows a lead tone that is moderately high gain but not too fuzzy since the buzz cut is engaged. Although I often have the resonance at 10 when the boost is engaged, for this clip I got a real midrangey tone by keeping resonance at 2 and rolling back the guitar tone control a bit.

To illustrate the sound with boost engaged and the buzz cut off, I used this riff by the band Third Day. Pretty fuzzy, but it works. 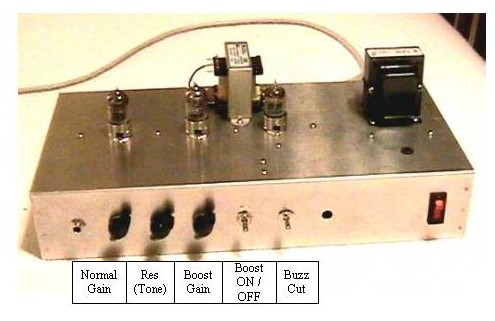 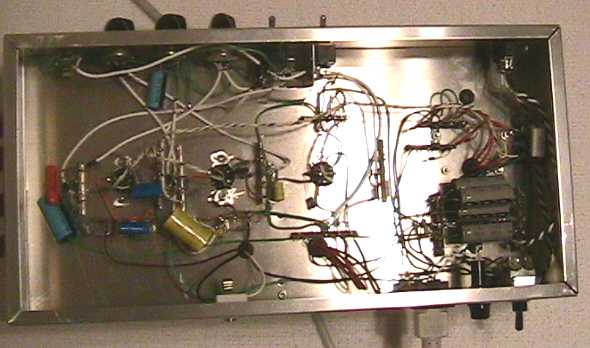